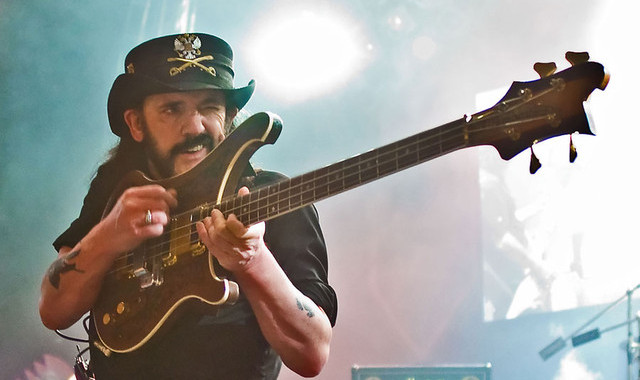 Music.  we all love it, and if you don’t, stop being my friend or a follower for that matter.  At any given point of my day music can be found playing somewhere near.  We all draw from music, and we all wish we could create music.  I personally have zero musical talent, but my appreciation is very intact.

Today the metal heads are mourning the loss of one of their own.  Lemmy Kilmister, the frontman for Motorhead died this evening, 2 days after finding out he had cancer.  Rough.

One of my best friends is a music connoisseur and was an absolute fan of Motorhead.  He had seen them a few times, and most recently at a show here in the 801.  Lemmy was in pretty rough shape and only lasted two songs, but be that metal bands love their fans, the band opened up the stage and gave the audience a chance to meet them.  J stood in line for about 30 minutes and had the opportunity to meet the legend.  He did say that from the time he could see the table Lemmy was sitting at, til the time he got to him was about 20 minutes and that Lem had downed a fifth of Jack in that time.  He for sure lived the rockstar lifestyle.

I haven’t had the chance to watch this documentary yet, but its on the list. Besides if Mike Ness pays homage to you, well, I had no choice. RIP.