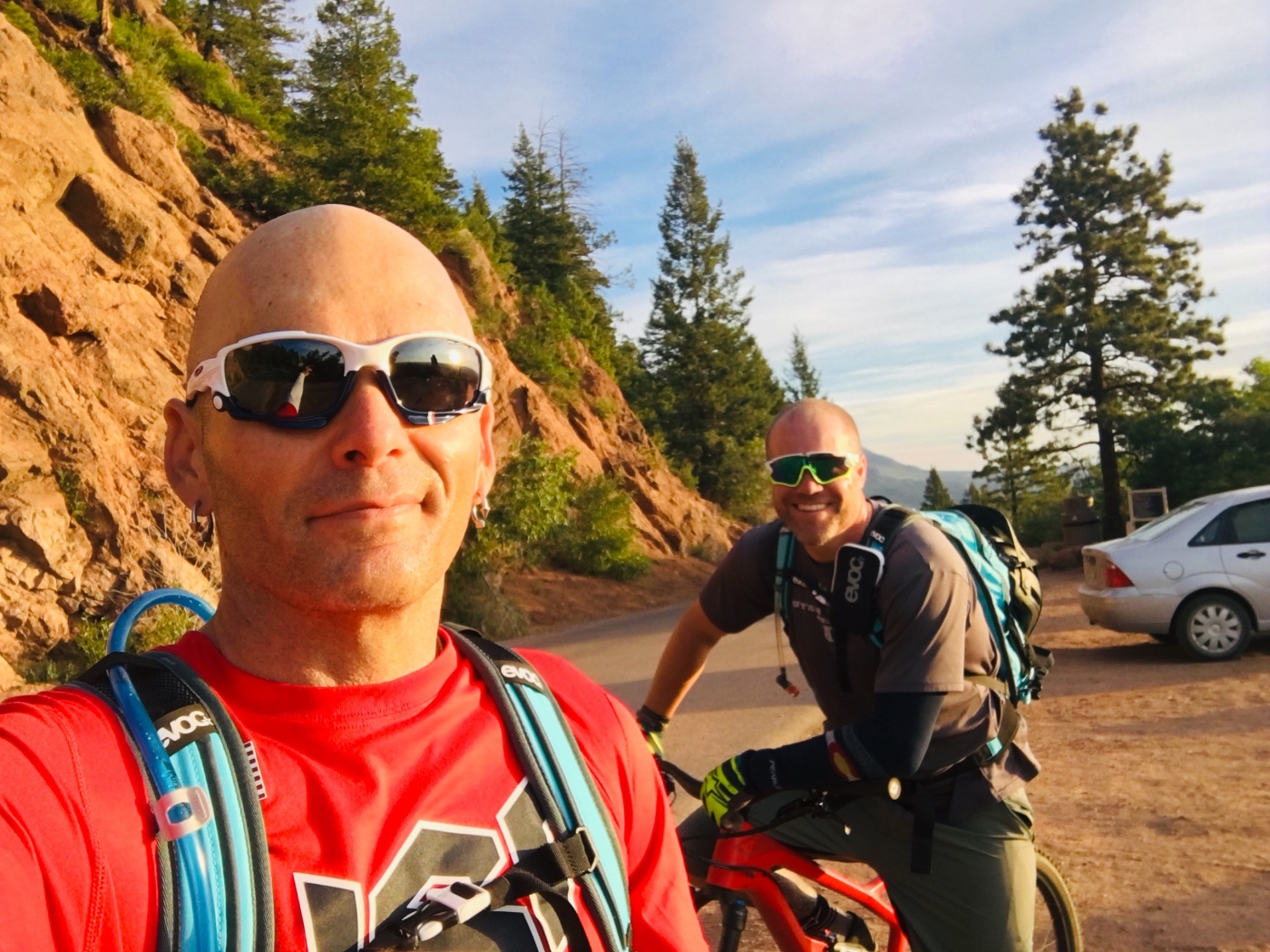 The plan was simple. Ride 12 hours hitting most of the state parks within Colorado Springs City limits. Not sure what made me say ok, and four days post ride, still not sure why I said yes.

Hour 1: Started climbing up the chutes to Gold Camp road. Some left over party goers were taking in the sunrise and started climbing on the rocks at the pullout. We left before they hurt themselves, it was too early in the day to deal with an ambulance.

Hour 2: Started climbing Buckhorn to 667. My sits bones were giving me a bit of grief from riding the prior two days leading up to this day. Buckhorn is always a rough climb for me. James is a billy goat. Cherry pie is much better than humble pie, yet I eat more humble pie.

Hour 3: I was told during the planning phase of this event there would be coffee and pastries. The plan was made to go to Inertia for coffee. This pulled me up the Palmer trail and down one of my favorite descents, section 16. Super Chunky, arm pump was present. Still didnt die, and coffee!

Hour 4: Coffee and chill. Inertia never disappoints, how could they when they serve coffee in chemistry beakers. The Barista knows us by name and gave us fresh water for our packs. I love water.

Hours 5-7: Working our way to Palmer Park and starting to ride. The temp is for sure rising. 95 in Colorado Springs is pretty much like hell, except green, and the drivers are probably better in hell. Routes were good, hit some lines that I hadn’t been able to get in the year and half of being here. James is still solid at this point, checking his work phone every now and then, not letting people harsh his mellow. I have now went through 200 ounces of water and still had Pulpit park before replenish and more coffee.

Hours 7-9: Pulpit park and University Village. Cool park, but the road getting there seemed like it never ended. I am starting to feel fatigue creeping up. Sit bones have now declared war on my soul. Been out of water for a hot minute, or hour. Cool switchback trails. Had to deviate in order to get me water. Thanks Colorado Running Store for the use of your water. Hydration, oh blessed hydration. Starbucks for shots of espresso, sugar tea, and a snack. Snack stuffed into my backpack only to be eaten two days later. Good hangout and rest, good enough to push through the last third of the ride.

Hours 9-10.5: Ute Valley Park. This park was rad. James may have used some adjectives to describe climbs in this park that sent a bullet to what was left of my soul. The climbs never came. Awesome flowing trails and man made features were present. I believe fatigue may have had an impact on our judgment a few times. Bushwacking for a good fifteen minutes was done. This place was an oven. Anyone that knows me, knows my irrational fear of snakes. I was cool with seeing one if it meant my imminent doom. So hot.

Hour 11-12: Redrocks Open space back. My life decisions have led me to this point, I really do need better, out of shape friends. This last hour is reminiscent of 90’s grunge band tragedies. Just falling apart when they were so close.

One thought on “12 hour Tour de Parks COS”